Lev Nikolaevich Korolev – a corresponding member of the Academy of Sciences Russia is one of those scientists who was engaged in creation of the first Soviet electronic computers. Luckily he has been still working in this scientific field. L .N. Korolev is a mathematician whose scientific interests lie in the field of programming, computation systems, architecture of computation systems, operational systems. 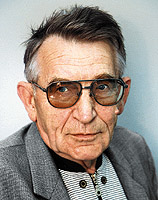 L.N. Korolev was born on the 6 th of September 1926 in town of Podolsk not far from Moscow . In 1943 he entered faculty of mechanics and mathematics of the Moscow State University. In 1944-1945, having been drafted to army service, he took part in liberation of West Ukraine, Rumania, Hungary, Austria and Czechoslovakia. In 1947 he returned to the university and continued studying until graduation (with excellent results) in 1952.

In !953-1975 L.N. Korolev worked at the Institute of Precise Mechanics and Computer Engineering under guidance of academician S.A. Lebedev's.

His appointment to the institute coincided with development of software for the first soviet computers BESM (1953), then BESM-2 and M- 20. L.N. Korolev was the first to solve logic and number of information problems what was result of his special research. He also worked with problems of coding, methods of automatic programming and symbolic transformation of information.

In 1956 Korolev created one of the first programs for BESM for machine translation of written text from English into Russian. In 1960 he submitted thesis on theory of machine dictionary and was awarded degree “Candidate of Physical and Mathematical Sciences”.

L.N. Korolev also headed the team which prepared complex of control software for multi-machine computing system for anti-rocket defence. The complex was based on computers M-40 and M-50. For those researches L.N. Korolev was awarded doctorate in 1967.

L.N. Korolev was also among the main collaborators in the creative team of BESM-6 designers. That was one of the world most famous universal computers with high performance (some experts even estimated it as the world's best for a certain period of time). Korolev, as deputy of its chief designer S . A . Lebedev, participated in development of its architecture and especially of its software. In 1967 his own group produced the first operating system for BESM-6, later named “Dispatcher- 68”, aimed at usage of the basic architectural solutions which he himself had suggested. Those were multi-program mode of problem solution, paged memory organisation with dynamic distribution of main memory during computations performed by means of operating system, combining of computations with parallel functioning of peripheral memory devices and input-output devices in all problems. Besides those main functions “Dispatcher- 68” enabled call of the programming languages and assemblers translators. One could say that it was also a predecessor of the future well developed operating environments and at the same time basis for several following operating systems, like BESM-6 OS “Dubna” (by N.N. Govorun, I.N. Silin), OS “Dispack” (by V.F. Turin), etc. It was aimed at batch processing and was implemented in most of computers BESM-6.

“Dispatcher- 68” also essentially influenced creation of real time operating system for BESM-6. That was OS ND-70 (New Dispatcher - 70) by V.P. Ivannikov. It already possessed developed means for parallel computations: organisation of offspring tasks, programs for parallel processing. One more important characteristic of the OS ND-70 was its developed complex of supporting means for integration of BESM-6 into multi-machine computing complex AS-6.

Notable contribution of L.N. Korolev and his team into those projects were awarded the USSR State Premium In 1969. In the following time he continued work on the complex AS-6, which was intended and intensively used in the soviet space research control centre. Complex AS-6 integrated BESM-6 with other machines. Among numerous research programs AS-6 was also used in a popular mission – joint flight “Apollo-Soyuz”.

Operating systems for BESM-6 and AS-6 were notable achievements; their advanced scientific level equalled (or partly surpassed) contemporary world standards of those times. As L.N. Korolev noted himself, their success was chiefly based on simplicity of BESM-6 logical structure and its rational architecture. Those features also made it highly reliable and popular among numerous users. Ideas embedded in organisation of computer interrelation within multi-machine complexes, such as functional specialising of the computers incorporated into the same complex, were advanced scientific solutions for the 1970-s.

In 1981 L.N. Korolev was elected a corresponding member of the USSR Academy of Sciences at the Department of Mathematics.

In 1970 academician A.N. Tikhonov established new faculty of computation mathematics and cybernetics at the MSU. That was the most advanced faculty of computation mathematics in the USSR . Since then L.N. Korolev has been holding a chair of the computation complexes automation at this faculty. He runs there a course of lectures “Review of architectures of the contemporary computers” and works on creation and development of educational materials, educational technologies and a courseware of the faculty. Educational computation complex (“Scientific-educational computation complex”) created by L.N. Korolev and his team was the most powerful at the MSU by the end of the 1980-s. In that complex L.N. Korolev and his team implemented a conception of the terminal network of BESM-6 (combined with other computers). The network encompassed all rooms, laboratories and premises of the faculty. Introduction of that system essentially facilitated both education and scientific research works of the university students. The project was highly appreciated by the governmental authorities. In 1982 L.N. Korolev and his team were awarded a premium of the USSR council of Ministers.

At present L.N. Korolev is still working at his chair where his scientific activity is focused on research of the parallel computations and implementation of their methods and technologies, especially in multi-processor computation systems. Korolev's team is solving problem of an algorithm mapping in structure of the computation system. They are also working on methods of data distribution and their processing based on program text analysis (static planning) which should be combined with dynamic planning – dynamic choice of appropriate processors during computation. Creation of optimal data processing schedule for multiprocessor systems which includes implementation of genetic algorithms is one more important field of their researches.

L.N. Korolev authored more then 80 scientific publications, among them 10 monographs and course-books. Two of them, “Structures of Electronic Computers and their mathematical basis”, Moscow, ‘Nauka', 1974 (2 nd ed.-1978) and “Microprocessors, micro- and mini-computers”, Moscow, ‘Nauka', 1984 are the most fundamental. Two academicians of the Russian Academy of Sciences and more than 40 scientists with “Doctor” and “Candidate” degrees were his students. In 1997 L .N. Korolev was awarded “Honorable professorship of the MSU”.

Lev Nikolaevich Korolev is a laureate of the USSR State Premium (1969), “Premium of the USSR Council of Ministers” (1982), M.V. Lomonosov premium of the MSU (1995). He is decorated with a “Lenin Order”, order of “October Revolution”, order of the “Patriotic war”[1] Award “For merits before Fatherland of 4 degrees” and several medals.