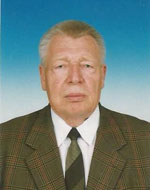 Dr. Y.S. Lomov, born 19.03.1937, is a laureate of the USSR State Premium, bearer of the honourable title “Distinguished Scientist of the Russian Federation (RF)” and also “Honourable Radio Master (of the RF)”.

Y.S. Lomov graduated from the Moscow Power Engineering Institute – MPEI (technical university); from 1965 till 1968 he worked at the Scientific Research Institute of Automatic Instrumentation. From 1968 till 1991 he was at the SRIDEC, where he began professional career as an engineer and finally became the institute's vice-director on scientific work, in other words – chief of a complex department. He took part, as a vice chief-designer, in design of digital computers ЕS1050, ЕS1060, ЕS1061 ES1065, VК-2R-60. Later he was the chief designer at design and development of the senior models of ES-computers line: ЕS1066, ЕS1068,ЕS1087, ЕS1087.20, ЕS1191.

Dr. Lomov was also the chief designer of the high-performance computers and computation complexes ES-computers, at the scientific and production departments of the USSR Ministry of Radio.

Since 1991 Lomov worked at the Scientific Research Institute “Voskhod” as a chief designer. There he initiated and headed design the first in Russia State Automated System “Elections”; Lomov performed scientific leadership and management over manufacturing and implementation of that, then unique, “geographically distributed” global system.

Scientific Research Institute “Argon” was his next working place. Being the first deputy of the scientific chief Lomov made decisive contribution to scientific project “Expedition” focused on scientific analysis and prediction of computer development in 2025 – 2045.

Y.S. Lomov authored more then 100 scientific publications, including 3 monographs, 11 patents (“Author's certificates”) for his inventions. During several years, in parallel with his main work, he lectured on computer subjects, as a professor at the Moscow Institute of Radio, Electronics and Automation (technical university) and at the N.E. Baumann Moscow State Technical University – Russia's oldest and one of the largest ones.

Dr. Lomov is a member of several scientific councils. He has taken part in many international scientific seminars and was the chairman of international commissions on common (interstate) testings of the computer systems of the (East European) countries – members of the Council on Mutual Economic Assistance – CMEA.

*The Russian Doctor of Science degree is the highest research degree in the country. It is essentially higher than Doctoral degree in English speaking countries. Many scientists having that degree are professors.

Placed into the Museum upon Y.S. Lomov's permission on the 18th of March 2017.