Georgiy Lopato was born on the 23 rd of August 1924 near town of Gomel ' in Byelorussia . His father, of a peasant origin, graduated from an agricultural academy in 1916. After the Revolution and service in the Red Army during the Civil War, he again studied and graduated, that time from the Leningrad Polytechnic Institute, in 1929. In the same 1929 the family moved to Moscow, where the father first worked as an engineer and then taught at the Moscow Institute of Electrical- and Mechanical Engineering in Agriculture (at present named Moscow State Agro-engineering University). It was very progressive organisation developing scientific traditions of its predecessors: the faculty of mechanics and electrical engineering of the Moscow Agricultural Academy and faculty of electrical engineering of Moscow Institute of Mechanical- and Electrical Engineering. The institute was established in 1930, by leading Soviet scientists - academicians V.P. Goryachkin, V.P. Williams, M.G. Evreinov, etc., who brought its work onto high scholarly level. Providing agricultural producing industry with necessary technical and electrical-power resources was one of the primary items of the state policy. The state program of electrification[1] had been established and conducted with active participation of academician K.A. Krug – then the leader of soviet electrical science. The atmosphere of general scientific enthusiasm influenced whole lives not only of teachers and collaborators but also of their families. 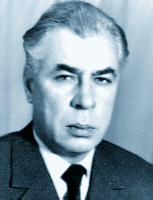 Georgiy entered a school in 1931. Unfortunately he had to share the tragic fame of his generation. Many hundred thousands young people celebrated their school graduation on the 21 st of June 1941, and for many of them it became the last peaceful evening in their short lives. The next morning whole country was woken up by explosions of Nazi bombs. Georgiy Lopato, however, was lucky to pass through the war without serious harm. In summer of 1941 he was engaged in fortification building works on approaches to Moscow and in October 41 he was called to army where he remained until 1946. He served all time in an antiaircraft defence unit near Moscow .

After demobilisation he entered the faculty of electricity and physics of the Moscow Power Engineering Institute, and graduated from it as an engineer in electro-mechanics, in 1952. The first appointment was at the All-Union Scientific Research Institute of Electromechanics (ASRIE) whose director was academician Andronik Gevondovich Iosifyan[2], one of the most famous soviet experts on aerospace electro- and radioengineering. In 1954 the institute received a set of project documents for its first computer – M-3, which its collaborators had to assemble by their own efforts. Lopato was dispatched for several months to the Laboratory of Control Machines and Systems headed by academician I.S. Bruk[3], whose team had designed it. There he studied M- 3 in detail under supervision of young designers N. Matyukhin[4] and B. Belynskiy and himself demonstrated both abilities and interest in new science. Soon Lopato became an expert in M-3 and actively participated in adjustment and testing during its construction at the ASRIE. In 1957 technical documents for M-3 were given over to the Academies of Sciences in China and Hungary . In 1958 he was sent to Peking where M-3 was assembled at a telephone plant for academic needs. Lopato successfully assisted its testing and initial operation control.

In April 1959 Lopato was invited by the Byelorussian council on national economy. He accepted it and soon arrived to Minsk to take position of chief engineer of the Special Design Bureau (SDB) at the Ordzhonikidze Plant[5]. In 1960 he headed design of the first Byelorussian electronic digital computer “Minsk- 1” (with electron valves).

In 1964 he became director of the SDB, which he headed during all its transformations and transfigurations (Minsk Design Bureau, affiliate of Moscow Scientific Research Institute for Digital Electronic Computers (SRIDEC)[6], Minsk Institute of Electronic Computers, etc. ) until his own retirement in 1987. During that time the institute grew into powerful Byelorussian scientific - research centre with large personnel of highly qualified specialists. It produced in different times dozens of various computers, six multi-machine computation complexes for special purposes, efficient operation systems and more than 50 various input-output devices.

Lopato himself headed and took part in 15 projects of various computers “ Minsk ” - 11 for serial production and 4 on special orders. He designed computers “Minsk- 1”, multi-machine system of uniform “Minsk- 222” . His multi-access system “Naroch”, which joined 12 ES computers, was the institute designing tool for various hard- and software systems. He also designed, or participated in design, of 5 ES computers and several personal computers. Those projects also resulted in forming of the Minsk school of computer design. It was always characterized with very practical solutions. Technical problems were chiefly considered in economic context what permitted beginning of commercial production almost immediately after finishing design part of a project. Thus computers “Minsk- 32” and ES-1020 were put into mass production within only 2 months after confirming their last drawing, what was almost a record then.

In 1969 he received scientific degree “Candidate of Technical Sciences”[7] and in 1976 was awarded a doctorate. Subjects of his both researches were connected with general purpose computers (civil, not special). In 1979 he was elected a corresponding member of the USSR Academy of Sciences. And in 1980 he became a professorship. Parallel with his scientific work he also headed a computer department at the Minsk Institute of Radio Engineering.

After his retirement Lopato kept on working as chief scientific collaborator of the institute. From March 1996 he headed departments of information sciences and computation systems of (independent) Byelorussian University of Modern Knowledge. In 1999 he became its vice – rector.

In 1995 he was elected a corresponding member of the Byelorussian National Academy of Sciences. In April 1999 the Cambridge International Biographical Centre ( Great Britain ) enlisted G.P. Lopato to 2000 most prominent persons of the 20 century science.

Georgiy P. Lopato died in April of 2003 and he is buried in Minsk .

1.It was a part of the all-union program – famous plan of the State Electrification of Russia (russ. GOELRO) – a core of the government policy in national economy in the beginning post-revolutionary period. Academician Karl Krug headed its scientific and was personally in charge of “electrification of agriculture” (see also “Karl Krug” in ”I.S. Bruk” http://www.computer-museum.ru/english/galglory_en/Bruk.htm).

2. Now the institute is named after A.G. Iosifyan. See more in (http://www.computer-museum.ru/histussr/istr4816.htm)