Prominent Soviet mathematician corresponding member of the AS USSR

Lasar' Lusternik — famous Soviet mathematician, member of the academy of sciences since 04.12.1946. In 1922 he graduated from the Moscow State University — MSU, where he was awarded a professorship in 1931. 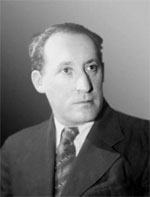 Lasar' Aronovich Lusternik was born on the 31st of December 1899 in town Zdun'skaya Volya (Zdunska Wola) of Kalish region, in Western part of the Russian Empire (now Poland).

L.A. Lusternik's participation in Luzin's  popular mathematical school/seminar (nick-named by the students, “Luzitania”) led him, among others, to active engagement in variational calculus in the 1920-1930-s. Jointly with another Luzin's student — L.G. Shnirelman, Lusternik implemented topological methods in variational problems for solution of the famous Poincare's Three Body Problem (more famous in Russia as, “Theorem of three geodesic /ones/”). For that purpose he also utilised minimax principle of G.D. Birkhoff's stationary points (Birkhoff, George). He was also the first to implement the method of finite differences in solution of the Dirichlet problem in 1926. Later, in 1940, he published an article “Dirichlet Problem” in academic periodical “Uspekhi Matematicheskih Nauk” (Achievements of Mathematical Sciences), issue 8.

His monograph, “Fundamentals of Variational Calculus” (Vol.1), jointly written with M.A. Lavrentev (Lavrentev Mikail Alekseevich) , was published in 1935. He continued studies of functional spaces topology and variational calculus in general also in the 1940-1950-s. His works were published in “Uspekhi matematicheskih nauk” in 1946 and in “Trudy Matematicheskogo instituta AN SSSR” (Works of the Mathematical Institute AS USSR) in 1947.

Later on his scientific school was developing variational calculus predominantly in geometrical field, while American school of Harold Calvin Marston Morse (also M. Morse) focused its efforts on analytical issues. Results of their work complimented each other.

In 1931 Lusternik was awarded professorship at the MSU and started lecturing on mathematics. In 1946 he was elected to the AS USSR as a corresponding member, at the department of physical and mathematical sciences, and was also awarded Stalin Premium (later re-named into the USSR State Premium).

He also worked at the V.A. Steklov Mathematical Institute of the AS USSR. In 1948 his department was transferred to the newly established Institute of Precession Mechanics and Computer Engineering AS USSR. That institute was the central scientific organisation on computer problems, where S.A. Lebedev (Lebedev Sergey Alekseevich) produced his world famous computer family BESM (incl. BESM-6), “Elbrus” and many others.

During the time of war work of all Soviet organisations was directly or indirectly aimed at the needs of defence. In 1943 L. Lusternik with his colleagues — mathematicians: I. Ya. Akushskiy (Akushskiy Israel Yakovlevich ), A.F. Bermant and L.Ya. Naischuller performed calculations of flight navigation tables for finding course parameters and distances. In 1944 he also created special charts for finding a ship's location upon direction finding radio bearings. Together with Akushskiy (Akushskiy Israel Yakovlevich) and V.A. Ditkin they also developed tables of Besselian functions.

As Akushskiy himself was working at the special Airforces' centre equipped with (analogue) computing machinery during the war, L. Lusternik had a good chance to learn advantages of facilitated computation methods on practice. Besides, a person with some mathematical background and scientific intuition couldn't but notice explosive growth of new practical problems and needs in mass-calculations. He could also feel emerging of principally new generation of computational technologies and equipment. Since 1942 he actively dealt with problems of computational and computer-oriented mathematics. In the same year he also set up a regular seminar on computations and computers, which was working rather successfully in spite of difficulties of the wartime. However, since Lusternik had any serious knowledge neither in electricity nor in electronics, the seminar was focused more on computational methods and other mathematical issues than on machines. As for the machinery they used, those were all mechanical and mainly old-fashioned “analytical calculators” (modified Hollerith tabulators) performing pure auxiliary functions. However, that was quite logical step in development.

Anyway the seminar became the first “undertaking” in that field and it was undoubtedly a progressive one. It attracted attention of some leading mathematicians (as well as promising young ones), many of whom were influenced by its topics and continued working on them after the seminar itself was dissolved. Thus, Leonid Vitalevich Kantorovich later based all his famous mathematical modelling and methods on electronic computers (although he was a pure mathematician and economist) and himself, initiated development of some electronic computing devices. Some of them were even in commercial production in the 1960-s. Kantorovich also developed his seminar experience in (facilitated) mass calculations, based on calculating-analytical machines, when he was calculating and composing tables of Besselian functions .

During his scientific life Lusternik often cooperated with some other mathematicians for publication of course-books and other university courseware. Most famous were his “Fundamentals of variational Calculus” (v.1, part 1,2) 1935, written jointly with Mikhail Lavrentev (also Lavrentev Mikail Alekseevich ), “Elements of Functional Analysis” (1951) et al. with Sergey Sobolev and some others. L. Lusternik was also one of the founders of a journal, “Uspekhi Matematicheskih Nauk” (Achievements of Mathematical Sciences), which was issued since 1936.

In 1946 L .A. Lusternik and N.E. Kobrinskiy published works on computer-related subjects, “Current state and ways of computer engineering development” in “Vestnik AN SSSR” (Bulletin of the AS USSR) and “Mathematical Engineering” in “Uspekhi Matematicheskih Nauk”. At the same time he displayed his ideas on some problems of computational mathematics in “Izvestiya AN SSSR” (Proceedings of the AS USSR).

In the very beginning of the soviet national computer appearance, in 1950, Lusternik set up the first regular seminar on programming at the Institute of Precession Mechanics and Computer Engineering[2] (ITMiVT) of the AS USSR. The institute's report on programming program for computer BESM, of 1954, composed by A.P. Ershov, was published on L.A. Lusternik's initiative as the first monograph on automation of programming. He also participated in collective work on the first Soviet (university) course-book on programming, “Programming for Electronic Calculating Machines”, led by famous mathematician M.R. Shura-Bura (Shura-Bura Mikhail Romanovich) in co-operation with A.A. Abramov and V.I. Shestakov, which was published in 1952.

In the 1950-s he performed more mathematical researches and, jointly with M.I. Vyshik, obtained some new results in the domain of asymptotic solutions of differential equations with partial derivatives for problems of mathematical physics. In 1956, Lusternik reported, jointly with M.A. Krasnosel'skiy, on topological methods of non-linear analysis at the Third All-Union mathematical Congress.

Lusternik equally kept on developing methods of computational mathematics and, in 1960 he and S.L. Sobolev published an important article in “Vestnik AN SSSR”. His own monograph, “Problems of Computational Mathematics and Computer Engineering” appeared in 1963. His most famous course-books of that period were: “Mathematical Analysis. Differentiation and Integrating.” was written jointly with R.S. Guter, I.G. Armanovich (et al.) in 1961. In the same year he and V.I. Danilov (et al.) published, “Mathematical Analysis. Functions, Limits, Series, Chain Fractions”. In 1963 they were followed by, “Mathematical Analysis. Calculus of elementary functions”, written jointly with O.A. Chervonenskis and A.R. Yanploskiy, and in 1965 he and V.I. Sobolev authored one more work, “Elements of Functional Analysis”.

In the 1950-s, Lusternik was also engaged in “more practical” work on computer usage. He cooperated with the USSR first computer centre from the moment of its establishing in May 1954, combining his work there with other duties. That was the Computer Centre No 1 of the Ministry of Defence (CC-1-MD). The Centre's vice director on scientific work – a talented engineer colonel A.I. Kitov (Kitov Anatoliy Ivanovich), had invited Lusternik to join its development. Soon Kitov himself proposed a progressive project of the (USSR first) computer network, which should be a double-purpose network controlled and maintained entirely by military personnel but aimed on both military tasks and solving of (civil) problems of national economy. In reality it could be very useful for the both fields “for the price of one”. Although the structure and basic ideas of the proposed network were undoubtedly very advanced the project was too “embarrassing” for both powerful bureaucratic circles and some conservative military administrators, who actively confronted it. Lusternik supported efforts of Kitov and so did the group of other cyberneticists – colleagues from the CC-1-MD. They were graduates of the Moscow Engineering Artillery Academy scientists N.P. Buslenko, I.A. Poletayev and also Isayev, Nechayev, Belonogov, Bukhtiyarov, Sosyura, Bogatyrev, Smirnov and other collaborators. Unfortunately “abstract reasoning” of enthusiastic and “emotional” young scientists did not convince the opposition and the project was never realised in practice. The failure obviously hampered, very probable, pioneer progress of the soviet computer networks.

In the middle of 1960 Kitov was dismissed from his official positions and also left the army. Then Lusternik also left the Centre. In 1960-1970-s he was continuing his work on new algorithms in computational mathematics, in mathematical physics and in planning and economy in general.

In 1960-1970-s L.A. Lusternik was continuing his works on new algorithms in computational mathematics, in mathematical physics and in planning and economy in general.

Working at the MSU together with academician A.N. Tikhonov (Tikhonov Andrey Nikolayevich) and -in a way- under his guidance, he carried on successful researches on numerical solution methods of typical computational problems. L.A. Lusternik and G.P. Klimov also developed modelling methods for production processes as mass service systems .

Lusternik and his students developed topological methods of analysis during almost 20 years. In all his works he tried to combine modern theoretical-multiple methods with classical geometrical ones.

The problems of history of science also lay in the field of his interests. Humber of articles on the history of mathematics in the USSR, published by him in various years, was a good evidence of that. Among them were: “Young years of the mathematical school of Moscow” and, “Essays on the History of Soviet Mathematics” in 1967, in “Uspekhi mathematicheskih nauk” (Achievements of Mathematical Sciences), and also, “Mathematics” in collection of works, “University of Moscow during the 50 Soviet years[3]”.

Lasar' Aronovich Lusternik died on the 22 of July 1981 in Moscow.

His works made essential contribution to progress of the national mathematical school, to development of computational mathematics and to implementation of digital computers in many fields of science and engineering.

He was decorated with a “Lenin Order”, an order “The Badge of Honour” and some medals.

2. More on the institute see in, Lebedev Sergey Alekseevich