Contemporary information science chiefly focuses its efforts on research and development of information and telecommunication technologies, with main objective of creation the world wide information space. Therefore it should enable and realise transience from the industrial society to the information one. The information space in question should be materialised as totality of information and computation resources and the means of user's access to them independently of his actual geographic situation. Academician Igor Alexandrovich Mizin was one of the most prominent figures of this field in the Soviet computer science. 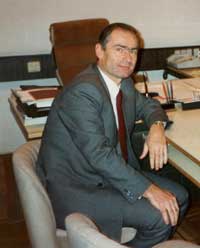 I.A. Mizin was born in Moscow to the military family, on the 12 th of April 1935. Following the family traditions Igor Mizin entered the N.E. Zhukovsky Air Force Engineering Academy in Moscow, directly after graduation from the secondary school in 1952. He graduated from the Academy in 1959 as military engineer with speciality “Maintenance of the air force radio installations”. During his academic study Mizin started scientific researches and published a work on a single band radio communication systems.

As a young specialist he received appointment to the Institute of Automatic Instrumentation, where he worked from 1959 till 1989. He began his career as engineer, later was promoted to chief of department and still later to the institute vice director on scientific work. Working at the institute he also grew to the rank of General-major. As a scientist Mizin headed research and design of the large scale data exchange systems, “territorial” data transmission networks and computer networks for defence systems.

Scientific works published by Mizin in the 1960-s were focused on researching and working out methods of increasing authenticity for the digital information transmission, through channels of various physical nature (telephone, telegraph and radio channels). He also developed methods for “interference-resistant” coding with error correction, and for making probability based models of a discrete communication channel with dependable distortions.

His dissertation thesis for the “Candidate of sciences” degree was titled “Development of methods for information exchange through closed telegraph communication channels in command control system of special destination”. He submitted it in 1966.

By the end of the 1960-s director of the institute academician V.S. Semenikhin launched research for new automated control system for strategic troops of the USSR Ministry of Defence, which included ballistic missiles, nuclear submarines, strategic bombers, etc. That system should be based on global data exchange network, which provided authentic information and enabled delivery of the coded messages to each point on the globe. However there was the delivery problem, namely, the messages should be transmitted within seconds, but the transmission channels themselves were unreliable since parts of them were of different physical nature. The team headed by Mizin did manage to create that network before 1980, as a part of the whole system.

That net was not based on traditional principles of the net organisation with switching of channels, but on switching of batch files what provided more efficient usage of channels and higher reliability of the data transmission. Also the error preventing algorithms were devised so, that they were individually automatically adjusted (“self-adjusted”) according to probability lows of the error distribution characteristic, for each type of the communication channels . “The given tasks brought more strict demands to soviet designers than those in the West: initial conditions in the USSR were more difficult as the transmission channels quality was much lower. At the same time, Output authenticity of the transmitted messages had to be higher then by the potential opponent”, commented Mizin much later. “We worked out, ourselves without usage of foreign experience or analogues, the whole philosophy and algorithms of the open systems functioning, that is what we now call seven-level system of the data exchange protocols. Until now our solutions keep proving their high quality level, reliability and capacity for work”.

Both scientific and practical results of the work on territorial (regional) data exchange networks were related to their most complex kind – the heterogeneous networks, which integrated practically all types of computers produced in the USSR in the 1960-s. Later there were also added compatible computers ES and SM (compatible with IBM and DEC computers correspondingly).

During those complex works Mizin's team solved numerous scientific and engineering problems. Among them there were choice of the switching method. The method of “code-grams” switching (also “data-grams”) became a “forefather” of the later batch switching. Mizin's code-gram method, combined with original principles of addressing and network control, still demonstrates some principal advantages. Also the choice of the network structure had notable specifics.

Mizin created and constantly improved complex of algorithmic procedures for the synthesis of networks and special software for those procedures. Those were very advanced works, no wander that “Scientific school of Mizin ” is still developing methods of analysis and synthesis of networks structures. Some of them are the following.

Protocols. In the beginning of the 1980-s international recommendations were published for the standard seven-levels model of the open systems interconnection. Protocols TCP/IP received broad implementation. During creation of the soviet national data exchange system new information exchange procedures were introduced, which had no analogues in the international standards for protocols. Most of the procedures possessed necessary complexity, flexibility and were promising in operation.

Software. Dozens of programs were written for computation control of the batch switching centres. Universal operating system was replaced with multi-task specialised dispatcher, which solved those problems more efficiently.

His works on the net Mizin performed in the 1970-s simultaneously with organisation of the experimental defence network ARPANet in the USA . ARPANet was the predecessor of global Internet, its first four nodes were connected by the beginning of the 1970, and the name “Internet” was suggested by V. Cerf and R. Kahn in their article[1] on the TCP protocol, in 1974. It's interesting to notice that the initial methods and routing algorithm for data packets flow accepted by the ARPANet designers, under certain conditions led to transmission failures. After eight or may be even ten years of struggle with that problem they essentially changed the algorithms and finally came to the data flow control methods analogue to what had been realised by I.A. Mizin.

In 1981 series of works on theoretical foundations as well as on soft- and hardware for large-scale data exchange systems performed by I.A. Mizin was awarded the “Lenin Premium”. In 1984 he was elected a corresponding member of the USSR Academy of Sciences, section of “Computer engineering”.

In the 1980-s Mizin developed new complex for telecommunication networks which included:

In 1987 Mizin was awarded the USSR “State Premium”. The books written by Mizin in that period became basic sources for many students and specialists. They were:

Integrated results of his researches, experience of design and operation of various large-scale networks and also principal conceptions of their design were analysed and presented by Mizin in collection of articles “Cybernetics and computer engineering” in 1986.

From 1989 till 1999 I.A. Mizin was director of the Institute of Informatics Problems (Academy of Science Russia). Since 1994 he was the designer in chief of the new system for the government information service, since 1997 he was also in charge of the automatic control system for arms-force of Russia .

That time Mizin worked on improvement of the national integrated network for information transmission. As early as in 1990 Mizin presented his statement, “Successful realisation of the large-scale data transmission networks development plan is impossible in our country without regular preliminary solution of the appearing complex scientific and technical problems. Until now we largely managed to foresee appearance of both the problems and new perspective tendencies. To preserve this our ability for the future it's necessary to develop researches in the following principal directions:

This statement of Mizin is still actual. The concept of Russian all-state information transmission network and its regional sub-variants was published by I.A. Mizin in the Academy collection of works “Information science systems and means” (issue 6, 1995) and in the journal “Electro-communications”, (No12, 1993).

Being fully aware of the depressive situation in the field of Russian data transmission and communication networks I.A. Mizin made many efforts to expedite integration of local networks, belonging to different administrations, into single common network. He widely used his experience and authority defending and promoting this concept on various administrative and governmental levels.

In 1997 I.A. Mizin was elected to the Russian Academy of Sciences, section “Computer Engineering” as the full member. Being convinced in necessity of the networks integration he considered it as the principal point in the modern information science. Thus in 1999 he published his last work “Contemporary state of integrated information and telecommunication systems and networks”. (periodical collection of works “Information science systems and means”, Russian Academy of Sciences, issue 9, 1999).

His scientific publications were generally characterised with efficient combination of fundamental mathematical basis with practical, applied approach to problems. Mizin published 190 works, among them 13 monographs and 12 patents.

Alongside with scientific research and design he always performed administrative functions. For a long time he was a chairman of scientific department “Theory of information transmission and processing” of the Scientific council on complex problem “Cybernetics”[2]. He took part in work of the USSR Academy of Sciences Presidium commission on multi-usage computation centres and participated in international organisation on standards. The last years he was the chairman of the Academy scientific council on information processing networks, member of the (Russian governmental) Coordination council on development of information service at the President Administration, member of scientific councils at the Security Council of the Russian Federation, at the Defence Council and at the Ministry of National Economy.

From 1996 until his last day he was an active co-worker of the Academy “Department of information sciences, computer engineering and automation”. As he paid much attention to education in his scientific field, he held special chairs at the Moscow State University for Radio-Engineering, Electronic and Automatics and at the Moscow Engineering University for Communications. The both were always very popular and, after some period of depression, their number of students is again steadily growing. Beside teaching he advised numerous dissertation theses. Mizin also had talent to quickly and easily form successful creative teams, always involving able young people. At present his former pupils still work in many military and civil branches.

When he left defence projects and worked at the academic institute of information science problems he maintained numerous contacts with scientists from Germany, Italy, South-East Asia and USA .

Unfortunately his life was not a long one. Igor Alexandrovich Mizin died on the 8 th of September 1999, when he was only 64.

He was awarded “Lenin Premium”, the USSR “State Premium” and decorated with order “Red Banner of Labour”, order “For Merits” and numerous medals.

2. Scientific council on complex problem “Cybernetics” – the USSR first and basic official scientific organisation on cybernetics. It was founded by admiral and academician Axel Berg, at the USSR Academy of Sciences in 1958.