Composed and translator
by Alexander Nitussov

V.V. Przhijalkovskiy was born 02.03.1930 in town of Serpukhov in the South of Moscow area. Same as many other Soviet computer pioneers he studied at the Moscow Power Engineering Institute, at the faculty of “Automatic and measuring instrumentation”. Having graduated from it in 1953 he worked at the affiliate of Moscow Special Design Bureau – 245 (SDB-245) in town of Penza (about 600 km South-East from Moscow). There he began as an engineer but soon was promoted to a senior engineer. 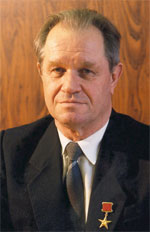 While in Penza, Przhijalkovskiy participated in a unique project designing a network model for the central control block and injection chinks block (model EIS) intended for operation modeling of large oil deposits. After that work he used obtained experience being scientific head of the next project – design of specialized computer “Granite” for statistic processing of artillery shooting data. In 1956-1959 Przhijalkovskiy worked as a senior engineer at a research centre in Noginsk (East of Moscow area). There he participated in design of new semiconductor computer (of its arithmetic device, and local and central control devices).

In August 1959 he moved to Minsk (Byelorussia) where he worked at special design bureau (SDB) of electronic instrumentation plant (named after G. Ordzhonikidze) till July 1971. At this plant – an affiliate of (Moscow) Scientific-Research Institute of Digital Electronic Computers (SRIDEC) - he was first the senior engineer of the SDB, then vice-director on scientific work and chief designer for computers “Minsk-2”. It was a transistor all-purpose computer. In 1962 it was in operation. “Minsk-2” together with its extended successor “Minsk-22” became the first Soviet semiconductor computers which came into commercial mass production. 925 machines altogether were produced.

In 1964 he was promoted to chief-engineer (vice director on engineering problems) of the (Ordzhonikidze) plant SDB where he was chief designer of computers “Minsk-23”, “Minsk-32” and later ES-1020. “Minsk-23” appeared first in 1966. It was designed for planning and economic calculations. It was the first Soviet computer whit symbolic logic, variable length of words and decimal arithmetic. It had developed system of interruption and pauses, universal connection with peripheral devices (multiplex channel), protected memory area with service programs, possibility of index fields usage for each program array, special commands for editing and processing fields with variable length; the commands consisted of seven-bit alpha-numeric symbols.

In 1968 the SDB completed research and design of the next computer “Minsk-32”, compatible with - then popular - “Minsk-22”. It also possessed all structural features specific for “Minsk-23”, that is variable length of words, - commands, - arrays, multiplex and selector channels, memory protection, multi-program operation, etc. “Minsk-32” was highly appreciated by customers; the total number of produced machines neared 3000.

In 1969 he successfully submitted dissertation thesis, “Principles of technical design for serially produced computers of smaller class” and was awarded scientific degree “Candidate of technical sciences”. It took place at the Polytechnic Institute (now it is the biggest technical university in the South Russia ) of Nowocherkassk (an industrial and university centre in the South-West Russia).

In 1970 V. Przhijalkovskiy, as the leader of chief designers team received his testimonial for the development of computers “Minsk”, of the second generation, which made up to 70% of the whole amount of the Soviet universal computers. He was awarded the USSR State Premium.

In 1968 new global state program was launched. It was creation of unified series of compatible computers ES. It was a joint long-term program of the socialist countries – members of the Council for Mutual Economic Assistance (CMEA). Minsk SDB of “Ordzhonikidze” plant was transformed into Minsk affiliate of Moscow SRIDEC – the project leading scientific-research organisation. Przhijalkovskiy as vice-director of the affiliate, was also appointed as the chief designer of new computer ES-1020 – a small (in size) computer of new system. Its commercial production was launched in 1971. That was the first Soviet universal computer of the third generation. It implemented disc operation system that was completely compatible with system IBM-360. Amount of manufactured computers ES-1020 totalled 756 machines, and 100 of them were produced in Bulgaria .

His following scientific activity was (and still is) closely connected with the SRIDEC. Since 1971 till 1977 he was scientific vice-director on ES computers and also chief-designer for special on-board computers at Moscow “Argon” institute. He was one of leading collaborators in project MSM – early warning system for anti-missile defence. In parallel with research and design of new ES computer – ES-1050 at computer plant in Penza (about 600 km South-East from Moscow /See also bio. “Bashir Rameev”/) he was heading completion of -on-board- “Argon-15” and ”Argon-16”. His team in Minsk started another computer - ES-1060.

In 1977 V.V. Przhijalkovskiy was nominated as the director, and little later director general, of a research and production enterprise in Moscow . He also remained in the ES computers program, now as the chairman of chief designers' international council (leading organisation in ES program) and still chief designer of the “Argon” project.

By 1985 the third ES series - computer family ES-3, was in intensive production both in the USSR and in other socialist countries, and by the beginning of the 1990-s the next series –ES-4 had been prepared for replacing it.

He participated in ES until 1990. After the program was closed he has been heading the Moscow laboratory of engineering and economic expert researches at the SRIDEC. His scientific interests lay in the fields of computer engineering, computation systems and peripheral hardware.

In 1969 he received the first scientific degree “Candidate of sciences” (comparable with the European ‘Doctor-Engineer'). In 1983 he received his doctorate “Doctor of sciences” (Dr.-eng. with promotion) and in 1985 was awarded professorship.

In 1970 he was awarded the USSR State Premium and in 1983 received a honourable title of “Hero of the Socialist Labour”. He was also decorated with order of the “Red Banner of Labour” in 1971, with order of the “October Revolution” in 1977 and with the “Lenin Order” and the “Gold Star” medal (the highest soviet award) in 1983.