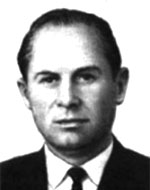 Mikhail Kirillovich Sulim was born on the 20th of September 1924, in a village in Kiev area (Ukraine), into a peasant family. Since 1929 he lived in Kiev.

In 1939, after 7 years of learning, he left school and continued his education at the 12th Kiev special artillery school. In 1941 the war broke out and the school was evacuated to town of Ilek (Orenburg area). In 1942 he finished there the 10th form and was sent to the 2nd Kiev artillery (military) college (which was also evacuated from Kiev). In January 1943, after successful graduation, he was sent to Voronezhskij front.

From January 1943 till July 1944 Sulim was an intelligence officer at an artillery regiment. For his service and also for actions in -victorious for the Soviet Army- Kursk battle M.K. Sulim was awarded an “Order of the Patriotic War” [1] of the first class (the highest). Later on, from July 1944 till August 1946, he remained in the army as a senior officer.

After demobilization in 1946 Sulim entered the Kiev Polytechnic Institute; in 1951 he graduated from it with honours and, in the beginning of 1952, received appointment in Moscow at the SDB-245 (СКБ-245), where the work on the first Soviet electronic computers was beginning at that time. His industriousness, insistence and rich personal experience (including the military administrative one) were appreciated and soon he was promoted to a senior engineer. When Bashir Rameev – leading designer of the first serial computer STRELA and the chief of the SDB Department №9, received new position at new computer center in town of Penza [2], Sulim replaced him.

Department №9 was engaged in new project – development of, then very popular, computer M-20 in close cooperation with the (Moscow) Institute of Precession Mechanics and Computer Engineering (IPMCE), and under general guidance of the latter. Sulim became the deputy of academician Sergey Lebedev of IPMCE – the chief designer of M-20.

While working on the M-20 project Sulim received rich experience in leading the intensive computer development. Thus, he became one of the most prominent technical experts of SDB-245.

In 1965 SCRE was transformed into the USSR Ministry of Radioindustry. M.K. Sulim remained in his position (however, already in ministerial structure) and in a year he was nominated as a deputy-minister. His main task also remained as development and production of computing machinery (both special-purpose and universal ones) and creation of automatic control systems on their basis (mainly the special-purpose systems).

His most important achievement then consisted in preparation of a directive draft on the further computer machinery development in the USSR, in its ministerial authorization and receiving final governmental approval. That directive, released in the very end of 1967, proposed development and production of a series of compatible computers with performance varying from 20 to 2000 ops. To provide all necessary means for producing the computers and their components for realization of that plan, more than 30 new plants and other enterprises would be constructed and some existing factories partly or completely modernized.

The directive also included statement on establishing new Scientific Research Centre for Electronic and Computing Machinery in Moscow - for administrating the development of that series of the third-generation computers. As the result of that a powerful industrial branch for producing contemporary computers – ES-Computers – was created; annual value of its production (within the industrial structure of the Ministry of Radioindustry) reached three billion roubles, in the prices of the late 1960s.

In the second half of 1969, during presentation of technical project of ES Computers, M.K. Sulim and B.I. Rameev proposed to leave the idea of ES-Computers compatibility with IBM-360, which had been approved by the authorities of the USSR and some socialist (East European) countries, and to switch to developing computers compatible with British ICL; in cooperation with it. The cooperation proposal was also approved by the British side.

Cooperation/compatibility with German Siemens Computers was an alternative. Their basic idea consisted in intensive development of the national computer science and technologies instead of “just following the IBM pattern” (as many considered it, then). Sulim and Rameev provided reasonable arguments defending their proposal. However, after ministerial discussion, in the end of 1969, their proposal was rejected, first by the minister of radioindustry and later by the ministerial committee.

Sulim did not wish to accept such decision. In May 1971 he left his ministerial position and was appointed the director -scientific chief- of the Institute of Computation Machinery (in Moscow).

At the new place Sulim continued familiar work in which he had good experience. He headed development of new computers and computing devices, and preparations for their serial production.

He arranged everything in newly-built institute; he also made one more modern canteen for the institute personnel and built summer-camp for the collaborators' children (pioneer camp) in the countryside outside Moscow. He also organized well-equipped modern experimental production. Sulim had numerous business and personal connections in all ministerial departments, what was a great help for his work and development of the institute.

Sulim and his engineering team worked on providing the ES-Computers with necessary devices for data input-output and data preparing, that was why they began development of peripheral terminal systems.

Terminal system ES-8504 was the first one of the series. It was also known as “User Station – US-4” which integrated number of input-output devices, communication equipment and data processing means. It was designed for data collection, accumulation, preparation, primary processing directly at users' places of various computing complexes and remote data processing systems.

In 1983, fulfilling of the governmental task – successful participation of M.K. Sulim's institute in the ES-Computers creation, was awarded with one more state prize – an order „Red Banner of Labour“.

In 1973 Sulim defended dissertation for the “Candidate of technical sciences” degree. As it demonstrated perfect engineering approach to solving analyzed problems and much higher scientific level than was commonly needed (undoubtedly – result of his rich practical experience) he was awarded degree “Doctor of Technical Sciences” by decision of the USSR Higher Attestation Commission [5].

In 1991, with the beginning destruction of national computer development, Mikhail Kirilovich Sulim retired. He died in September 2000.

1. Order of the Patriotic War

5. Order of the Patriotic War