Andrey Nikolayevich Tikhonov (also Andrei Nikolaevich) — famous Soviet mathematician and geo-physicist, who set up theory of differential equations with minor parameter at the major derivative as special domain in asymptotic analysis. He is also famous for his numerous solution algorithms of various applied problems.

He was an academician AS USSR, double bearer of honourable title “Hero of the Socialist Labour” and was awarded with umber of other highest state awards. 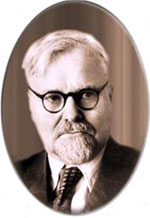 A.N. Tikhonov was born on the 30 th of October 1906 in town of Gagarin (previously Gzhatsk), in Smolensk region (West Russia). His father – Nikolay Vasilyevich Tikhonov was a tradesman, the mother – Maria Nikolaevna took care of the two sons (Andrey and the elder Nikolay). In 1910 the Tikhonovs moved to Moscow where the boys visited a city's gymnasium (secondary school). With outbreak of the Civil War (1918—1921) they first moved into Ukraine but in 1919 returned back to Moscow.

Exhausting World War I, which resulted in the (Russian) October Socialist Revolution and then continued as the Civil War brought national economy to total collapse. Life was extremely difficult at those times, so Andrey had to start working as an office clerk at the Agronomists Service of the Byelorussian–Baltic Railways, at the age of 13 (in 1919).

However, in 1922 he successfully passed exams for the curriculum of so-called “workers' faculty”1 — the evening courses of general education. He also intensively prepared himself to entering exams at the Moscow State University (MSU) and in September of the same year began studying there at the physical and mathematical faculty.

After graduation, in 1927, he stayed as a postgraduate at the Scientific-Research Institute of Mathematics, which was a part of the MSU. After that he remained at the university as a lecturer on mathematics. His first scientific researches he performed still being a student. They were concerned with topology and functional analysis . Thus in 1926 he introduced a notion of topological space – so-called “Tikhonov's product” (of topological spaces). He also proved theorems of bi-compactness of bi-compact spaces product (in other words, the product of any set of compact topological spaces is compact) and of existence of a static point at continuous mappings in topological spaces.

In 1933 MSU underwent serious reorganisation, which -besides others- resulted in establishing of special Physical Faculty. Tikhonov received an appointment at its new chair of mathematics. At the same time he was also appointed as scientific specialist at the Moscow Geophysical Institute. In 1936 he successfully submitted and defended dissertation (habilitation) thesis, “On Functional Equations of Volterra, Type and their Implementation in Equations of Mathematical Physics”.

His principal mathematic interests lay in the field of solution methods of the equations of mathematical physics, especially problems of stability, in inverse problems and dependence of differential equations solutions from a minor parameter by derivatives. He also made essential contribution to theoretical geophysics and to modelling of physical and chemical processes. He proved the unicity theorem (uniqueness theorem) for equation of heat conductivity.

In 1936 he was awarded doctorate and was appointed as a professor (at the MSU); now he held the chair of mathematics at the Physical Faculty. In 1937 he also started his work at a new Institute of Theoretical Geophysics AS USSR, which had been established by famous mathematician O.Y. Schmidt2.

In 1939 he was elected as a corresponding member of the AS USSR at the department of natural mathematical and natural sciences on speciality “Geophysics and mathematical physics”.

In 1948 Tikhonov received the governmental directive, which entrusted him with urgent organisation of the “Computational Laboratory” for modelling and calculating of atomic explosion processes. In 1950 he also performed fundamental research on theory and methods of implementation of electromagnetic fields in researches of the Earth crust.

In 1951 he and A.A. Samarskiy (Samarskiy Alexander Andreevich) jointly published a monograph “Equations of Mathematical Physics”. Their most important common works in 1956-1963 included researches on various variants of differential schemas for solving differential equations with partial derivatives, their stability and precession on non-homogenous nets. Their work also resulted in theory of homogenous differential schemas.

In 1953 academician M.V. Keldysh (Keldysh Mstialav Vsevolodovich) established new Institute of Applied Mathematics (IAM), within academy's structure. Tikhonov received position of its Deputy Director, which he held for many years.

He reported on solution methods of the ill-posed problems at the International Congress of Mathematicians in 1966. Importance of the subject has been subsequently proved by the world recognition.

Generally speaking his regularisation method and solving of the ill-posed problems became the basic item of all his subsequent scientific work.

On the 1 st of July 1966 Tikhonov was elected an academician (real member) of the AS USSR, department of mathematics, specialisation “Mathematics”.

Progress of Mathematics at the MSU

In the same 1966 he headed a chair of computational mathematics at the MSU Faculty of Mechanics and Mathematics. In 1970, chiefly due to personal efforts of M.V. Keldysh, new Faculty of Computational Mathematics and Cybernetic (CMC) was established at the MSU (also famous under Russ. abbreviation “VMK”) and Tikhonov was appointed as its dean.

Since then his name was closely connected with all following important events and achievements of mathematics at the MSU (and not only there). Thus, he headed work of several scientific teams, which performed the following researches:

In 1978, soon after the death of academician M.V. Keldysh, Tikhonov was appointed as director of the M.V. Keldysh Institute of Applied Mathematics (AS USSR) and held that position until 1998.

He headed the MSU Faculty of Computational Mathematics and Cybernetic until 1990.

Andrey Nikolaevich Tikhonov died in the evening of 7.11.1993 г. in Moscow and has been buried at the city's central cemetery.

In 1966 Tikhonov was awarded the “Lenin Premium”, “for outstanding contribution to computational mathematics”.

He was also twice awarded the title “Hero of the Socialist Labour” and, in 1953, decorated with “Lenin Order”, “…for exceptional merits in executing special governmental directives”.

In 1953 he was awarded the “Stalin Premium” (later named State Premium ) for successful work in atom project.

In 1963 he received “Lomonosov Premium” (the 1 st grade) for his research “On Solution of ill-posed Problems” and in 1981 the “Premium of the USSR Council of Ministers”.

1. “Workers' faculties” – special educational courses successfully functioning in the 1920—1930-s. They were set-up according to the governmental directive of 17.09.1920 with the purpose of additional training, education upgrading and eventual preparing working young people for entering universities, institutes, colleges, etc. That should increase general level of the young people – older as 16, who were otherwise not able to systematically study at schools. Studying at the faculty was officially recognised as professional occupation the students received state scholarships. In the 1960-s they were transformed into “Preparation courses”.