Kamil Akhmetovich Valiev was born in the village Verhniy Shander, in Republic Tatarstan ( Russian Federation ), on the 15 th of January 1931. In 1954 he graduated form the Kazan State University[1] (KSU) where theoretical physics was his basic subject, which he studied under professor S.A. Altschuller since 1952. Later he was also KSU post graduate. 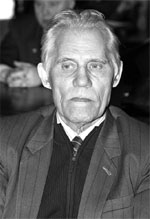 In 1953-1964 K.A. Valiev worked as lecturer, senior lecturer and then he himself held the chair of physics at the Kazan State Pedagogic Institute. As the scientific centre Kazan , among others, is famous for its advanced scientific school of magnetic radio-spectroscopy founded by academician E.K. Zavoiskiy[2], who discovered electronic paramagnetic resonance as early as in 1944. Zavoiskiy also performed some outstanding researches in nuclear physics.

As a scientist Valiev conducted researches on nuclear-magnetic resonance (NMR) experimenting with nuclei of paramagnetic atoms. Prediction of the NMR signal amplifying effect, connected with existence of atom electronic magnetic torque, was an essential result of his investigation. Later Valiev was engaged in experiments with liquids based on the nuclear and magnetic resonance methods. He also successfully implemented technologies of infra-red spectroscopy and combination dispersion of light. In course of those works he solved fundamental problems of Brownian (rotating) motion of organic liquids non-spherical molecules, defined contribution of Brownian (rotation) motion in nature of lines' width in optical spectrums and discovered new relaxation mechanisms of electron and nuclear spins in electrolyte solutions.

In 1958 Valiev successfully submitted thesis “Magnetic resonance on nuclei of paramagnetic atoms” and received degree “Candidate of sciences”. As his research made quick progress, -relatively- soon he submitted his next thesis on theory of magnetic resonance and optic-spectroscopy of liquids, for which he was awarded a doctorate in 1964.

After 1964 Valiev focused his scientific interests on problems of semiconductor electronics and microelectronics, electronic components of computers and physical processes which are forming basis for advance of technology in microelectronic production.

In 1965-1977 Valiev worked as director of the Scientific Research Institute of Molecular Electronics (SRIME) in Moscow . Both the institute and plant “Micron”, also headed by Valiev, played leading role in designing and mass-production of silicon digital integrated circuits, semiconductor components of immediate access memory and circuits for their control, as well as special amplifiers and microprocessors.

Both the institute and the plant “Micron” headed the group of enterprises from the same industrial branch: a plant for semiconductor instrumentation in Minsk (Byelorussia), syndicate “Svetlana” of Leningrad (St. Petersburg), a design bureau from Vilnius (Lithuania), plant “Mezon” in Kishinev (Moldova), plant “Mion” in Tbilisi (Georgia), design bureau and plant “Azon” in Baku (Azerbaijan) and plant “Electronpribor” in Fryazino (Moscow). By 1970 the SRIME presented basic technology for mass production of digital and linear integrated circuits with technological norms 2-5 micrometers, which was implemented at 11 enterprises of electronics industry.

In the mid-1970-s scientific centre “Microprocessor” of the SRIME in cooperation with the Institute of Precession Technologies jointly worked out a program which became the basis for subsequent production of big integrated circuits. From the middle of the 1976 microprocessors and other complex circuitry came into intensive use in aircrafts, space researches (e.g. space satellites “Cosmos”) and in defence field.

It was K .A. Valiev who led the development of principal branch of microelectronics – silicon integrated circuits. He is recognized as one of the founders of the soviet national microelectronics both as the science and industry.

In the 1970-s Valiev made notable scientific discoveries in the field of ultra-high speed integrated circuits based on gallium arsenide what played important role in improvement and development of more modern kinds of specialized hardware and instrumentation. Later his design and practical implementation of gallium arsenide based integrated circuits was awarded the governmental Premium of Russian Federation.

On the 28 th of November Valiev was elected a corresponding member of the USSR Academy of Sciences, department of general (technical) physics and astronomy.

In 1974 Valiev's contribution in establishing of the Moscow scientific centre on electronics and also in development of research and industrial manufacturing was awarded the “Lenin Premium” (the USSR highest premium).

Valiev himself wrote a good article where he described that time. It was included in the book – collection of memorial articles by (former and actual) collaborators of the research centre, published in 1998.

He remembered, “ The name of our institute “Molecular electronics”, had almost nothing to do with its real research or business orientation but it was chosen by no means on secrecy reasons. It was inspirited by the atmosphere of enthusiasm, may be even euphoria, among the young people who approached creation of microelectronics. It seemed that the way from silicon integrated circuits to molecular electronics was not long. To-day the former - to-morrow the latter. However, 30 years passed since then and the time of microelectronics is still the matter of future. Anyway, we were greatly supported by the feeling of belonging to a project of national importance that, on our enthusiastic opinion, could be compared with not less than nuclear researches. Our direct working connections were stretched over all USSR territory, our integrated circuits became basis components for the most important devices and instruments. I am really happy to be a part of that global creative process”.

Since 1977 K.A. Valiev has been working at the USSR Academy of Sciences (AS USSR). From 1977 till 1983 he headed department of microelectronics of the Physical Institute (AS) and in 1984-1988 headed laboratory of microelectronics at the Institute of general problems of physics (AS). In December 1984 he was elected a full member of the AS USSR, department of information sciences and automation (components, materials for computer engineering and diagnostics).

From 1988 Valiev established the Institute of Physics and Technology (AS USSR/Russia), and became its first director. Here he formed solid and advanced scientific basis for fundamental researches on technologies in micro- and nano-electronics based on electron-ray, laser or x-ray lithography, ion-plasma micro-structuring of crystals, as well as other perspective processes. He remained the director until 2005. Valiev also founded academic Institute of Microelectronics and Automatics in Yaroslavl ( 300 km North from Moscow ).

He authored about 600 scientific publications and inventions. At the academy he is the chairman of the joint scientific council on “Fundamental problems of components basis of the information, computation and control systems”.

In the year 2000 academician of the Russian Academy of Sciences Jores (Zhores) I. Alferov[7], together with American co-recipients Herbert Kroemer and Jeck Kilby[8], were awarded Nobel Premium on physics. The Premium of the year 2000 continues the line of transistor discovery, laser (later also maser) principle, tunnel diodes and tunnel effects in semiconductors. The Nobel committee noticed that the, contributed by Alferov and Kroemer, development of semiconductor hetero-structures used in high-speed and opto-electronics, “provided basis for semiconductor structures which could be used for super high-speed computers”. Jack Kilby of Texas Instruments (Dallas) was prized for his achievements in integrated circuits which enabled noticeable advance in microelectronics, in the 1960-s.

Similar researches in the field of integrated circuits were performed in the USSR by K.A. Valiev. It won't be an exaggeration to say that his achievements reach the highest level of modern physical science.

K.A. Valiev has been awarded USSR “Lenin Premium”, the “State Premium” of Azerbaijan , E.K. Zavoiskiy premium and the Ministry of Defence premium. He is also decorated with two USSR orders “Red Banner of Labour”, USSR order “October Revolution”, medals and two Russian orders “Merits For Fatherland”. He is also academician of the Academy of Sciences Republic Tatarstan .

1. Kazan State University ( University of Kazan ) - one of the oldest Russian universities (founded in the beginning of the 19 th century -1804). Famous for its advanced mathematical school and number of world famous scientific names, e.g. mathematicians N. Lobachevskiy, N. Chebotarev, etc.

3. E. K. Zavoiskiy International premium. Electronic Paramagnetic Resonance (EPR) that was first discovered in town of Kazan by lecturer of the Kazan State University Evgeny. K. Zavoiskiy (1944) received concrete implementation almost at once and its practical importance is steadily growing in physics, biology, chemistry, etc. The Premium was established in 1991 on initiative of professor K.M. Salikhov that followed his consultations with international EPR society. The premium won support of the Academy of Sciences Republic Tatarstan , of the Kazan State University and was recognised by the Government of Tatarstan, Academy of Sciences Russian Federation , international A.M. Ampere society, etc.

The premium is given for successful researches in the field of EPR and/or implementation of their results. The laureate is awarded special diploma, medal and a sum of money, his lecture is published in the “Applied Magnetic Resonance” journal. The laureate receives status of the “Guest of Tatarstan Government”. Most resent laureate is professor Jan Schmidt of Huygens Laboratory, University of Leiden (the Netherlands), the laureate of 2006. (www.kfti.knc.ru), (http://www.kfti.knc.ru/zavoisky/index.html).