Russian Virtual Computer Museum.  → Hall of Fame  → At the Cradle of the First Chinese Computer

At the Cradle of the First Chinese Computer

The article has been published for 90 years jubilee of Oleg Konstantinovich Shcherbakov – the first Soviet scientific expert in the People's Republic of China to begin assembling of the first Chinese digital electronic computer BESM-C (Russ. БЕСМ-K) – the Asia's quickest one that time.

By the middle of the 1950s the Institute of Precession Mechanics and Computer Engineering (IPMCE) – scientific leader of the Soviet computing, became a world renowned scientific centre. No one significant scientific conference, meeting, etc. took place without its participation. It was often more and more often mentioned at foreign organisations; Chinese engineers became its permanent guests-trainees.

China needed modern science and engineering. The 25 years period of almost permanent inner struggle, civil war (1924-1949) and Japanese occupation with its unimaginable atrocities was finally over; the first people's state in Chinese history made its first steps towards the social, scientific and economic progress. The first modern industrial enterprises and scientific centres were founded.

Many Chinese engineers were sent abroad for learning and accumulating experience in computers and computations. Those who were studying in the USA naturally preferred and propagated american projects – education is the best agitation. However, when S.A. Lebedev put BESM-2 in regular operation at the IPMCE, a representative delegation of the Chinese Academy of Sciences visited him. After detailed acquaintance with the institute's work and computers Chinese experts proposed cooperation plan for establishing scientific centre and production means in China, as basis for development of national computer science, engineering and production.

Of course, the proposal was backed with the general cooperation program of the Soviet and Chinese academies of sciences, and also approved by the government of China.

Actually, the Academy of Sciences of the Peoples Republic of China (AS PRC) first planned to assemble in Peking very popular computer M-20; it was also designed by S.A. Lebedev a little earlier than BESM-2 and quickly became the first Soviet computer used in many scientific and other organisations.

However, when, just a little later, the BESM-2 was completed and put into operation at the IPMCE the Chinese academy (AS PRC) immediately made decision in favour of it.

According to the adopted agreement the Institute of Computer Engineering (ICE) – practically a copy of the IPMCE – should be established in Peking and its personnel to be trained with mutual efforts. IPMCE provided a full set of technical documentation on the BESM-2 for the Chinese side and rendered scientific and technical assistance in its assembling and testing. Although the project suggested a great deal of work to be done by the IPMCE, that was “only natural” considering the Soviet-Chinese cooperation level of those times.

Thus, it was agreed that minimum one Soviet technical expert of the IPMCE, would be permanently working in Peking, providing all necessary practical assistance, lecturing, giving consultations, etc., etc. So, a big team of Chinese trainees, fellows and post graduates (for scientific degrees) studied in Moscow, while five scientists of the IPMCE were working in China in 1957—1959.

Oleg Konstantinovich Shcherbakov – the expert on computer power supply systems and the first of the Soviet engineers in Peking, had to get the most difficult part of the work. 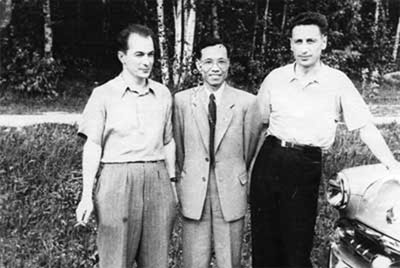 In the beginning of 1957 S.A. Lebedev, who was analysing real potential of China for establishing -and developing- large new branch of science and engineering, told Shcherbakov, “They, in China, are going to make a computer. Go please, and see what they really have and can do”.

It all started with “mix-up and confusion”. Nobody was waiting for him the airport Peking; he didn't speak any Chinese. However, he had a piece of luck, some man who did not meet his own guests paid attention to the lonely, and obviously uncertain, foreigner. As he could speak some English the man addressed Shcherbakov and, quickly assessing the situation, brought him to the city, to his friends – very nice family by whom Shcherbakov spent his first night in China.

The next morning everything was cleared: Chinese partners hadn't received any information about the expected specialist from Moscow, therefore nothing was prepared for his arrival. (“Where does the blame lie?” – classics).

Anyway, the first day's “lack of care” was “more than fully“ compensated with the following sincere friendliness and, in particular, abundance of hard work.

The ICE of Peking was the basic organisation for producing the first Chinese computer. It was founded two years before; all that time it was mainly searching for appropriate scientific and technological information and sending Chinese specialists to Germany, USSR and USA for learning or qualification upgrading.

Construction of the institute's building, at a Peking's suburb, was just being completed; new collaborators were themselves finishing it, painting it, cleaning its rooms and the territory around, etc. They also brought simple furniture and laid electric cables. 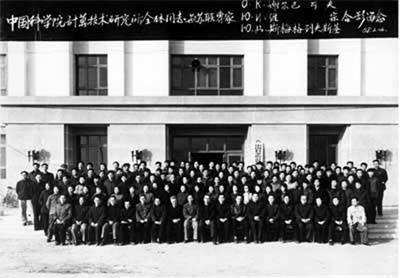 Collaborators of the Peking Institute of Computer Engineering (ICE) in front of its building. Oleg Shcherbakov is sitting in the centre of the first line.

Shcherbakov personally experienced amazing enthusiasm and working capacity of all Chinese collaborators, from the institute director to its interpreters. Working time was not limited, he usually returned to his hotel late at night but the work at the institute didn't stop for a minute. Next morning he found long list of questions and working plans for the day on his table; besides that everybody was constantly asking him about something new.

Shcherbakov's was clear and definite, he also had broad powers, however, in little known for him country he had no possibility for consultations with anybody from Moscow, in case of need, and pure (if any) knowledge of Chinese language with its, unknown for him, hieroglyphs made impossible direct communications with Chinese colleagues (even with the use of dictionary).

There were also problems with Chinese interpreters, many of them did not know technical terminology. Nevertheless he mobilized all his knowledges in English in which he had some experience (during the war -WWII- he was a radio master working with British and American maritime convoys on the North Front, in Arctics) and managed to “qualify” them in the field of electronics and computing.

Chinese Academy of Sciences was headed by its founder Guo Moruo (1892—1978) – famous scientist-historian, writer and politician (member of the Communist Party of China since 1927). During about ten years he lived in emigration in Japan, however, with the beginning of the Japanese aggression against China, in 1937, he returned to join the liberating struggle. 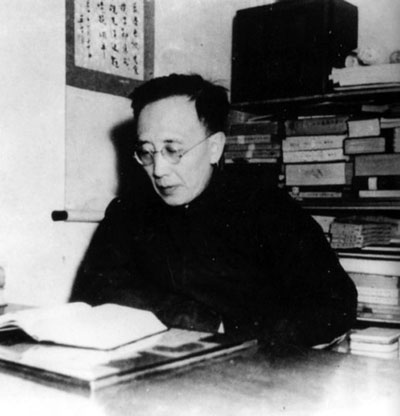 Guo Moruo personally supervised work of the Peking institute. Decent chinese one honours his motherland and always is ready to give it all possible help (a good example for others).

When leading scientific specialists Fan Syngbi, Khe Shaoduon, Uo Dzikan[1] and some others learned about the beginning work returned to Peking from the Europe and USA. Those amazingly modest people willingly quit “comforts of the European life” and did their best at the institute. They studied and edited technical documentation and translations of the Moscow IPMCE scientific publications, together with young engineers they attended lectures of the Soviet experts and then themselves worked with young engineers. That was an essential assistance. They also tried to study Russian language and helped the Soviet scientists to see and know China.

Till his last days Oleg Shcherbakov remembered his Chinese colleagues, their desire to study and understand the given tasks in all -even the smallest- details, their impressive industriousness, friendliness and hospitality.

Shcherbakov himself lectured on power supply systems and devises, made expert evaluations on the enterprises of Peking, Shanghai, Nanking and other towns engineering and industrial manufacturing possibilities. He also made notable contribution to organisation and beginning of industrial production of electronic components.

That time Chinese industry could not yet produce (miniature) bantam valves (there were about 4000 of them in BESM-2), semiconductor diodes (5000 in BESM-2), ferrite parts, some types of resistors, instrumentation and many other things. Lack of components and equipment was compensated with supply from the AS USSR, while China was developing its own industry. With Soviet aid, of course.

A new industrial ministry was established for that task – numerous Soviet specialists were working at its enterprise (constructed with the USSR assistance). The first Chinese radio components were available in 1958.

In 1958, Moscow academician M.A. Lavrentjev, very influential scientist-mathematician, visited ICE. There he studied work of the Soviet and Chinese specialists and officially confirmed scientific and economic advantages of the BESM-2 choice. 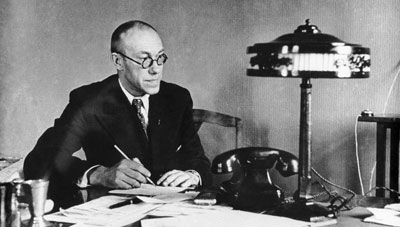 Assembling of M-20, what was first proposed by the Chinese scientists, would be much more complicated and expensive.

S.A. Lebedev had been very encouraged with Shcherbakov's detailed report. He sent more experts to Peking. A.A. Pavlikov was the next one. He delivered lectures on peripheral devices and helped to design them. By that time a big scientific team was already working at the institute (ICE); development of the computer was running at full speed. IPMCE helped with equipment, instrumentation, raw materials – all that was assembled at the ICE, tested and the Chinese specialists were trained.

Y.I. Vizun came after A.A. Pavlikov. He established production unit at the ICE and organised there manufacturing of ferrite cores for memory units. IPMCE of Moscow backed it up by producing and sending to China big amount of ferrite cores for the first memory device. IPMCE already had its own, well equipped and rather powerful, manufacturing section. It had been made with combined efforts of the V.V. Bardizh laboratory's collaborators and the IPMCE experimental plant.

Meanwhile ICE made sufficient progress and in May 1958 Chinese engineers received the first ICE – made ferrite cores; BESM-K had 200.000 pieces altogether.

Experimental piece of BESM-2 had been assembled rather quickly. 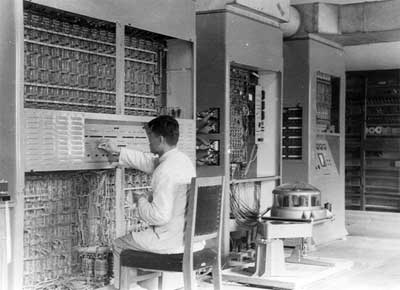 Actually, it was initially planned to finish the work to the 1st of October (10 years jubilee of the People's Republic of China), however, it was not done timely, (may be because of certain confusion caused by the approaching “Cultural Revolution”). It is also worth mentioning that, at the same years, another Soviet computer – M-3[2] was assembled in Peking.

In autumn 1958 V.A. Melnikov the head of Moscow (IPMCE) expert team arrived to Peking. He supervised complex testing of the computer, that had begun at the ICE. 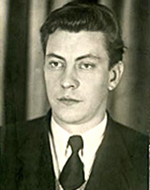 Chinese variant of the computer in general was repeating BESM-2 of the IPMCE, with some improvements. It also consumed 35 kWt and occupied 170 м2.

In 1958 Oleg Shcherbakov (later, other experts from IPMCE) was triumphantly awarded with the Chinese big state medal “Chinese-Soviet Friendship[3]”. 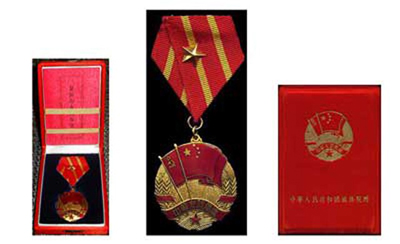 The medal was given by the (first) premier of the People's Republic of China Zhou Enlai[4] (1898-1976) himself, who personally helped with organisation and control of the works on BESM-K. 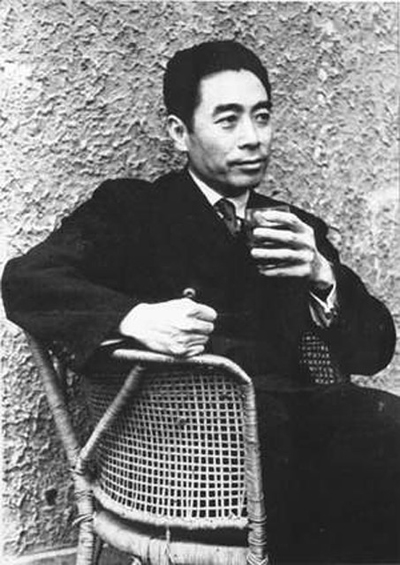 Of course, there still remained some more technical problems, nevertheless, qualification level of the young ICE specialists had been notably up-graded, so, they could do much more themselves. The Chinese scientists and engineers who studied in Moscow returned to Peking and also actively joined the work. 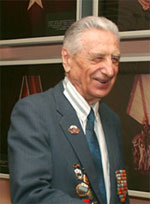 Dr. Oleg Konstantinovich Shcherbakov (celebration of his 80 years jubilee at the IPMCE)

Most of the remaining problems was solved by A.S. Fedorov – the last of the Moscow (IPMCE) experts in Peking. By his departure in April 1959 Chinese computer BESM was intensively tested in operation mode. Its performance reached 10000 ops.

It was officially accepted in operation under name BESM-K, with the title,

“THE QUICKEST COMPUTER OF ASIA”. 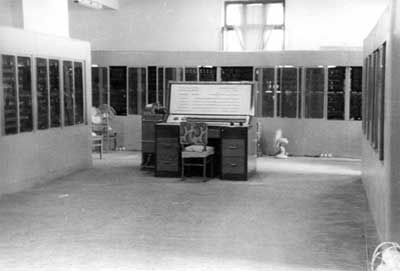 1. There may be other spellings of the names.

2. M-3 was a small computer, designed by academician Isaak S. Bruk's team, at the Power Institute of the USSR Academy of Sciences. In China it was assembled at the Peking telephone producing plant under engineering supervision by G.P.Lopato (Lopato Georgiy Pavlovich), for needs of the national Academy of Sciences.