The only references in general calculating machine books about arithmometers made in Leningrad that I have seen, are the note about small scale (кустарный) production of Portable arithmometer [1] and the description of Portable in books [2], [7]. The purpose of this paper is to give some new information on the subject even though there still remains much research to be made. Very useful information source has been the series of books “Ves’ Leningrad: Adresnaya I spravochnaya kniga” or for some years only “Leningrad: Adresnaya I spravochnaya kniga”. If no explicit reference is mentioned, the information comes from these annual publications, which can be studied online at the pages of The National Library of Russia. Unfortunately, the book did not appear in years 1936, 1937 and 1938.

The calculating machine production in Soviet Union began 1924 in Moscow at the factory dedicated to Feliks Dzerzhinskii, where “Original-Odner” and from 1928 “Felix” arithmometers were made. However, the capacity of the factory 12835 arithmometers in 1929/30 and 30000 planned in the following year was smaller than the amount needed [4]. In Moscow the “CAM” factory made around 1930 a few “Soyuz” arithmometers, but that did not help much. Thus it was natural to think about making arithmometers also in Leningrad, where Uved many former employees of Odhner factory with much know-how. The official plan of Leningrad oblast economy council was to begin the arithmometer factory in 1931/32 so that it would have been ready in 1932/1933 to produce 30000 arithmometers annually [6]. Everything happened in schedule and the arithmometer was initially called Portable. The factory had several owners, and as we shall see the production goals were not reached.

The first known prototype of Portable arithmometer is the one with serial number 13 shown in the figure below. Its logo has latin letters J. M. E. A., the meaning of which is unknown. Polytechnical Museum in Moscow has otherwise similar Portable with an unreadable serial [2]. [7]. but the carriage transfer system used also in later models is more advanced. 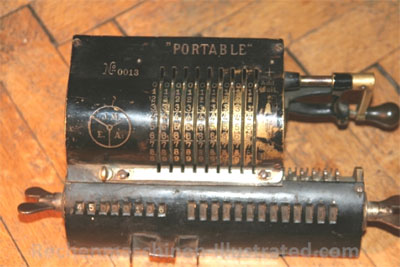 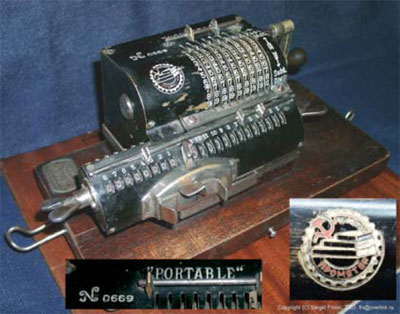 In 1932 Portable was produced by Latvian cultural-educational society Prometejs, which put its logo on the machine. The factory was situated in the place of f_ormer SoyuzOrgUchet (all-union association for the organization of accounting and computing) repair workshop at 5 Liniya 2, Vasilii Ostrov. so it is possible that the development of Portable arithmometer was made there by SoyuzOrgUchet. The number of personnel at Prometei factory was 140 and the serial numbers of known arithmometers vary from 34 to 771 [11]. Prometejs society also had a very successful slide rule factory atul. Marata, 85.

At the end of 1932 the production of Portable was given to Kirja (the Finnish name of book), in Russian “Кирья”, which was the official publishing house of Finnish literature but also had in Leningrad a typewriter and calculating machine repair shop, cardboard factory and photo atelier [13]. The official name of the factory was “Zavod Melkogo Mashinostroeniya” founded in 1932 [8] and located at Pr. Karl Marksa 6, now called Bolshoi Sampsonievskii Prospekt. The name of the arithmometer was changed to Kirja, but otherwise it was similar with Portable. From 1934 the arithmometer factory was controlled by Carelian-Finnish autonomic republic commissariat of heavy industry [5], even though the production remained in Leningrad. The Finnish name Petroskoi of city Petrozavodsk on the metal cover of Kirja № 100 only refers to other activities of Kirja concern there. In 1934 the number of people working at Kirja arithmometer factory was 100 persons. The serial numbers of known Kirja arithmometers vary from serie 1 № 82 to seriel № 1136 and serie 2 № 3912 [11], [12]. Thus the numbers start from the beginning and do not grow continuously from the last serial of Portable. Some Kirja arithmometers like serie 2 № 3912 at [12] had a different carriage transfer mechanism and different logo. 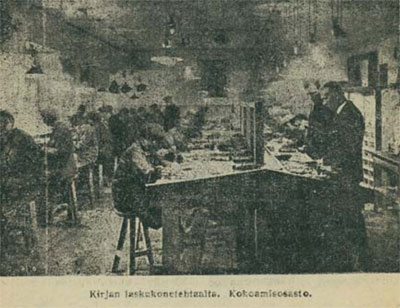 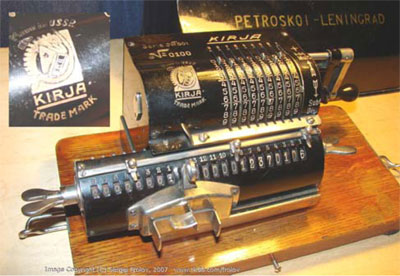 Kiija concern as well as Prometejs society were shut down in 1937 and arithmometer production was then, maybe even somewhat earlier given to SoyuzOrgUchet, which was strong background contributor on calculating machine production and also had arithmometer repair shop at Universitetskaya nab. 19. Some changes were also made to the design. The main crank is different and register clearing wing nuts were replaced by small cranks. Known serial numbers are 4337 and 4572. It is not known, where these arithmometers were made, but possibly the production continued at Prospekt Karl Marksa. The serials seem to continue the numbering of Kirja.

SoyuzOrgUchet then let zavod 2 (earlier known as Vulkan) of LenShtampTrest to continue production. Its address was 9 Sovetskaya ul. 3. According to Leningrad handbook 1934 the factory produced arithmometers, but in 1935 production of arithmometers is no more mentioned. The directors of the factory worked earlier at the SoyuzOrgUchet experimental calculating device factory (see chapter 4), and it is possible that the arithmometer production was planned already in 1934, but realized only later. At least the Leningrad factory book [8] based on 1934 information does not yet know the arithmometer production of this factory. 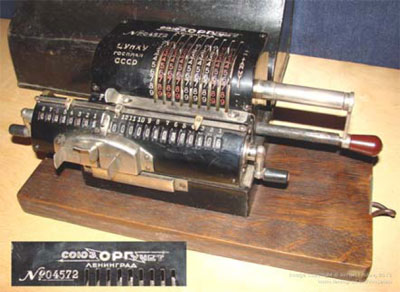 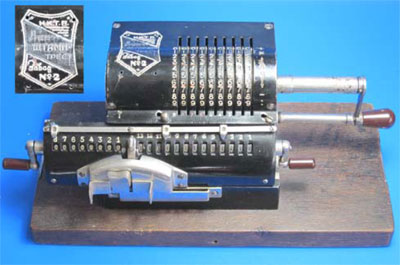 GosRemProm was a masterskaya, which for example repaired typewriters, calculating machines, watches etc. at Kurlyandskaya ul. 33 but according to 1931 issue of Leningrad handbook it also produced arithmometers. 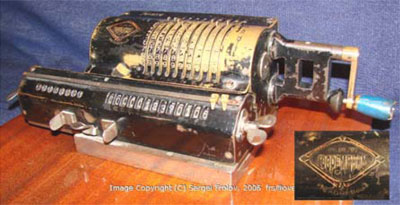 In 1932 the arithmometer department of GosRemProm was incorporated to car and tractor equipment plant of artel “ZAT” working at the same address and in 1933 the name of the artel was changed to form “ZAT”. Leningrad industry book [8] states that “ZAT” arithmometer department had only 14 workers in 1934 and that it was founded in 1927. This year evidently means the beginning of GosRemProm activity. The arithmometers of “GOSREMPROM” and “ZAT” are quite different even though they were made at the same place. Their production amounts cannot be great because the number of workers was small and “ZAT” arithmometers were no more made in 1935. 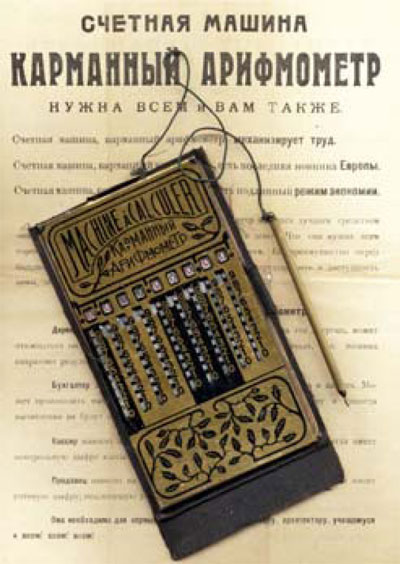 The factory was founded 1929 [8] and production equipment was evidently bought from France by SoyuzOrgUchet, which had permission to import material and then had experimental calculating device factory at the same Leshtukov street address. Almost identical ReBo calculators were made in France at the 1920ies but no more during 1930ies [12]. The 1935 magazine article [3] proposed the termination of the pocket arithmometer production, and in 1936 the factory already made parts for mechanical toys instead of arithmometers.

In addition to the arithmometers described above there may still exist some other makes. At least Leningrad handbook 1930 knows artel Standart at Zagorodnyi 10 and 1931 telephone catalog [9] kooperativ Jupiter, which stated that they make arithmometers. Existing examples are, however, not known. The 1939 Leningrad handbook does not list any calculating machine makers, only arithmometer parts were made by the former Kiija typewriter and calculator repair shop at Volodarskogo pr. 59 led then by the successor of Kiija called Kareloizdat.

The total amount of aritmometers made in Leningrad is quite small. From the serial numbers one can estimate that the total amount is less than 10000, not even the amount of Feliks arithmometers produced in Moscow during one year 1929/1930. Feliks certainly was cheaper than Leningrad arithmometers, but according to German calculating machine expert Hans-Jiirgen Denker the quality of Portable/Kirja is essentially better. Also Russian calculating machine specialist L.E. Maistrov writes that his Portable now belonging Moscow Polytechnical Museum, is smooth to use [7]. A Finnish activist tells in his memoirs [10] that Kirja arithmometer production was profitable.

More than arithmometers Soviet Union needed another types of calculating devices, like listing adding machines, automatic electromechanical calculating machines, bookkeeping machines and Hollerith machines (счетно-аналитические машины) [4]. The first two types were made in Moscow with names “DSM” and “KSM” [2]. Hollerith machines were also mostly produced in Moscow but in Leningrad the factory dedicated to Max Hoelz (Макс Гёльц) made tabulators. Evidently all these devices that were considered more important than arithmometers, took resources that would have been needed to develope arithmometer plants in Leningrad. Competing Original-Dinamo arithmometers from Kharkov also needed financing. They were more expensive than Feliks, but Hans-Jurgen Denker does not esteem the quality of his Original-Dinamo.